Austrian wins contest with a photo from Budapest

Who took the coolest photo of a hotel lobby? The photo contest that hetras held in May has finished. The winning prize went to Gerald Huber from Innsbruck for his photo of boutique hotel Baltazár. 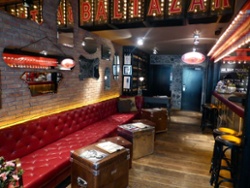 Who took the coolest photo of a hotel lobby? The photo contest that hetras held in May has finished. The winning prize went to Gerald Huber from Innsbruck for his photo of boutique hotel Baltazár.

Katrin Assmann, a member of the jury and managing director of the Cologne-based communication agency Unique, explains why: "One of the things we particularly like is the angle Gerald chose for the photo." A communication designer by profession, Katrin immediately gets a feel for the design concept behind Baltazár's lounge. "This area, which is a space for guests to meet, has a simple, open and welcoming design, and it’s really just a very cool lobby."

femory, a start-up that specializes in producing all kinds of apps to do with photos and videos, also really liked the idea behind the contest. Regina Wagner, femory's founder and a member of the contest jury, announced the other winners: Those on 2nd to 5th place will receive a voucher for a photo book, and winners 6 to 10 a Polapix voucher each. The photos of cool hotel lobbies submitted to hetras came from hotels from all over the world, including cities such as Berlin, Dubai, Glasgow, Hawaii, Las Vegas, Utah, Stockholm and Vienna.

The winning prize, a night in the brand-new Hotel Schani, goes to Gerald Huber. Hetras' CEO, Martin Reents, was part of the team that officially opened the hotel located at Vienna's new central station in April this year. Reents is hugely in favor of the style of lobby design adopted by many new hotels and now also seen in some traditional ones. "It's just brilliant to see hotel staff right there amongst and mingling with guests as opposed to being cooped up behind stuffy reception desks and using dated technology. Hotel Schani is a great example of this progressive trend of opening up more towards guests and I am sure Gerald is going to have a great and inspiring stay here. And who knows, perhaps he might yet come away with some more cool photos ..."