Opening Ceremony for hetras in London 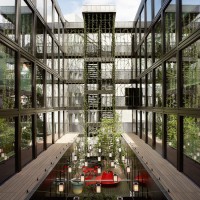 Munich, Germany and London, England. hetras, the developer of cloud-based hotel management software, announced today their first implementation in London at the citizenM Bankside hotel. The 192 room hotel just south of the Tate Modern has been sold out for months leading up to the Olympic Games. The hetras HMS powers the heart of the operation.

The hetras HMS combines PMS, CRS and distribution in a single application. With over a dozen interfaces to third party systems, hetras’ preparations were anything but trivial. However, as hetras operates entirely in the cloud, it was never necessary for a hetras employee to be on-site in London to carry out the implementation.

All reservations for citizenM originate electronically over the internet. Guests check themselves in and out via kiosks on arrival. citizenM ambassadors welcome and can assist guests with this process, while staff at the citizenM central office near Amsterdam use hetras to manage and optimize the rates offered via their own website as well as their distribution channels.

citizenM entrusts the very core of their successful business to the hetras system in their existing hotels in Amsterdam (2), Glasgow and London, but has also committed to use hetras for their announced roll out of three additional hotels in London, two hotels in New York City, Paris and Rotterdam.

Ulrich Pillau, co-managing director at hetras, said “we are fortunate to have such an innovative and dynamic customer such as citizenM. They are rewriting the rules of hotel operations just as hetras is reinventing the world of hotel software. The quantum leap from legacy PMS/CRS systems to cloud based advantages become apparent the minute you look at hetras and its functionality.”